The subject came up in one of the DCC communities. The OP was chagrined because they tried to run one in their game and it...did not go well. I felt for them. This is one of those "no amount of training will prepare you" situations. Not even the infamous Episode #11 of Spellburn will put your mind at ease on the topic, no matter how many times you replay it. But it will flow pretty smoothly in the wild, once you've done it a couple of times.
I thought I'd share some of the tips I've gathered and turned into house/table rules. A lot of my personal preferences do not follow RAW. I know this genuinely shocks some of you.
SPELL DUELS: quick and dirty

Stick to the table.
You can do this.

It has been one hell of a year already. The DCC community continues to be my touchstone to sanity, and truly is the family I look forward to seeing a couple of times a year. But 2020 has seen to it that in-person greetings are off the table, which means a lot of dark days for many of us.

Sadly, things remain in flux around the globe. Situations may yet become more dire for some of us before we're allowed to get together in person again.

In recognition of the seemingly-insurmountable odds ahead of humanity, I'd like to extend a personal invitation:

If you are facing a wall and need help -- whether it's info on a local food pantry, or a small financial boost, or just a place to vent -- please feel free to reach out to me.


Comment here. PM me on FB. Email me. DM me on Twitter. Whatever you're comfortable with. If I don't have the answer, I'll look for it. Even if I can't give physically, I can put out a word.

The Tribe has been there for me since 2013. I clung to DCC (and the G+ community) like a damn lifeline during so much turmoil. The group on FB has made me proud to be a continued member this year. I feel it's important to give back, even if it's just to listen and grant you a point or two of fleeting Luck.
Posted by Judge Jen at 10:12 PM No comments:

Email ThisBlogThis!Share to TwitterShare to FacebookShare to Pinterest
Labels: Tribe

The 40'-long container full of boxed sets has landed!

~ personal note from Jen ~
I am so nervous I could puke. Yes, I've already found a couple tiny little things that could stand a bit of tweaking in the next printing - because it's what I do - but it's an AMAZING product and I cannot WAIT for y'all to get it in your little paws.
*squibble*

And though it's been an age since I've posted here ... this is nearly the culmination of the first Big Thing. So here we are.
Posted by Judge Jen at 8:35 PM No comments:

About this time, 4 years ago, I was quaking in my boots as I planned for my first excursion to Lake Geneva for Gary Con VI. "I finally get to meet these people who seem to get me!" ...followed by the dreaded, "What the hell am I going to wear in that weather?"

I ran no games. I immersed myself in it completely...and laughing at Doug's table is still, all these conventions later, in my top memorable experiences. As was the greeting I received in the bar the first night...which Bob will not let me live down.

(It also turned out to be an on-site interview, though I didn't know it at the time. Good thing, that.)

I'm jittery as I prep/pack for Gary Con X, but the anxiety is a different flavor after a few years' exposure. Now it's, "I get to see MY PEOPLES! My FAMILY!" ...and still, "What the hell am I going to wear in that weather?"

This year I am running a paltry 4 games, 2 slots each for 2 DCC Lankhmar adventures (1 pending publication, the other... well, mine. It might be more of a sandbox, depending on the table. And that worked brilliantly at the off-book game last year.) Oh, and Rat-Snake circles are happening in the lounge this year after hours. Every night, if y'all want.

I simply cannot WAIT to see those of you who'll be there. I will dreadfully miss some who aren't able to attend, but I promise to make the most of it on your behalf.


In case anyone hasn't heard yet -- Spellburn made the short list of ENnie nominees this year! 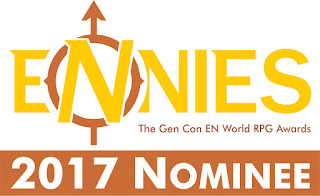 We're ecstatic and humbled, and we hope we can count on you to rally the troops when the voting opens! (July 11 - 21, 2017) Winners will be announced Friday night at Gen Con!


To get you revved up into voting gear, let's do an informal set of questions -- all about DCC RPG, naturally! The link to my little quick-and-dirty, UNOFFICIAL** survey is below. Using the ENnies as a base for my inspiration, here's a sampling of the questions I'm putting out there:

There are so many resources and products out there! Some fall off my radar. Some are extremely helpful to players (and judges) new to the game, or new to RPGs as a whole. If you don't mind taking a stab at it, I think it could prove beneficial to the DCC community. Thanks!

Here's the link: https://goo.gl/forms/JlejHXbM6nsypGqs2
Type in your favorite under each heading. (I simply do NOT have time to populate the multiple-choice lists, sorry!) It doesn't matter if you don't have the name exactly right. Try to limit your entries to one per category. And best of all, you can come back to it if your answers change over time.
(Please comment here if you run into any errors with the link or the survey.)

DISCLAIMER: I will periodically post the answers, as a resource for players and judges alike.

**Yes, this is an UNOFFICIAL, independent survey. It is neither prompted nor requested by any publisher. This is not to be considered corporate research data in any capacity. Any and all results, whether in part or in whole, will be revealed independently by me [on my blog, in DCC RPG communities on G+/FB, or on air via Spellburn]. I am not collecting e-mail addresses with this form, and your answers will never be released in conjunction with your identity.

Free RPG Day: The annual holiday of our people!


~ Reuniting with Troy Tucker, the guy responsible for "all this",  and bringing my 1st printing #DCCRPG tome to its *6th* Free RPG Day event. I will eventually have to retire the poor thing, but yesterday was not that day.

~ Running Dieter Zimmerman's Not in Kansas Anymore for a group of not-quite beginners, including one of the FLGS owners, and player Riley stealing the show (he made the whole damn thing so enjoyable, I felt zero pressure - I officially want him in EVERY GAME I EVER RUN UNTIL THE END OF TIME... "Live your truth, man!").

~ Ran The Arwich Grinder for the first time ever. I unabashedly used different voices and inflections and made sound effects (which were probably as atrocious as my mapping skills) and a whole bunch of stuff that I usually shy away from, all because I could tell it was weirding out David and his kid (who were over from FLL). A+++, will run again, has potential to let me run something that might actually surprise/impress Bob!

~ Seeing familiar faces from folks who came out last year, and meeting new people who traveled from St. Pete, Tampa, Sarasota, and Ft. Lauderdale (2-3 hrs one way) just to come to Dungeon Games and play games.

~ After busting ass to coordinate GMs and sign-up sheets for scheduled games that some people poo-pooed, the FLGS had their highest sales day in the store's history. Yeah, I take a little pride in that. We do what we can to help those we love.

~ Handing out the first-ever print product from Sanctum Secorum...

~ Getting to surprise players with DCC RPG swag that rarely makes it into the wild! I'd been sitting on the stadium cup set from last year, so I brought one for each game and let them dice off for it. Some of the new players were as ravenous for "one of everything" as I've been in the past. Kindred spirits!

~ And, finally, the payoff that's stuck with me for the past 12 hours: My last table was a DCC Lankhmar demo, with players rolling up characters from scratch, which really helps immerse them into the literary material and showcases a few of the fundamental system changes from "regular" DCC. One of the players had been in last year's playtest campaign but the others were inexperienced and pretty rapt...until the characters continued to separate and go their own ways, despite leads and prompts to join up. At some point I stopped trying to fight it, and just gave them each 5-10 minutes of their own little "chapters", then they finally merged together for the primary story thread with about 90 minutes remaining. I embellished "Literary Lankhmar" and created a challenge with the promise of a tidy settling of debts...and the ending left me with the resolve that, while it's a great setting and I'm a little tied to both Leiber's and DCC Lankhmar, it really feels better in an ongoing capacity. (More on that pontification later.) One of the players who'd driven from Sarasota had been sitting with a nonplussed expression for the better part of 3 hours, but at the end he said, "I really wasn't sure. I was thrown off by the lack of 'party' activity...but now I realize, it's just like the books! Even Fafhrd & the Gray Mouser are rarely side-by-side for the whole thing! I'm really looking forward to this now!" Not only did I breathe a sigh of relief at not bogging things down for the player or diminishing his enjoyment of the past 4 hours...but apparently I succeeded in my translation of the material - and even better, I invoked the feel of Leiber!! I may do ya proud after all, Michael Curtis. :)

{more pics may come, just so I can keep them all in one place for archival purposes} 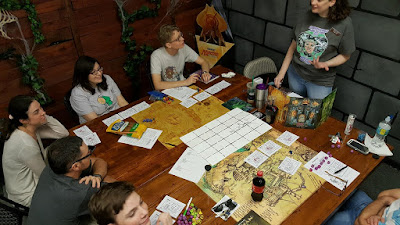 Get these guys some cue cards.

Recording late at night during the cooler months (y'know, when it's not ~80 degrees at 10pm) is great.

Recording late at night these days results in comments like, "Huh. I hear crickets."

Me: You bein' funny?

"No, I really hear crickets."

So, um, fair warning: while my sound editors rock, we might have crickets in the show(s). Both podcasts, even. Damn. And the more I mute, the more noticeable they'll be when I unmute.

Holy hell, these crickets sound like they're lined up around my window like there's an iPhone release for insect-kind at midnight, followed by a rave giving out free Fireball. I suppose it could be worse; could be tree frogs after a good rain -- they'll keep me up at night -- or those damned whippoorwills... God bless the silent lizards who eat these things.

**Related, but not really: Any first-hand experience with/suggestions for a standalone mic with an on-board mute button?
Posted by Judge Jen at 12:15 AM No comments:

Judge Jen
Official Chief Acolyte for DCC RPG, the first game to get me to crawl to the other side of the screen.